Node.js can be used very well with relational databases and SQLite is no exception. In this post, we will build a simple REST API for Quotes step-by-step with SQLite and Node.js using the Express Js framework step-by-step. 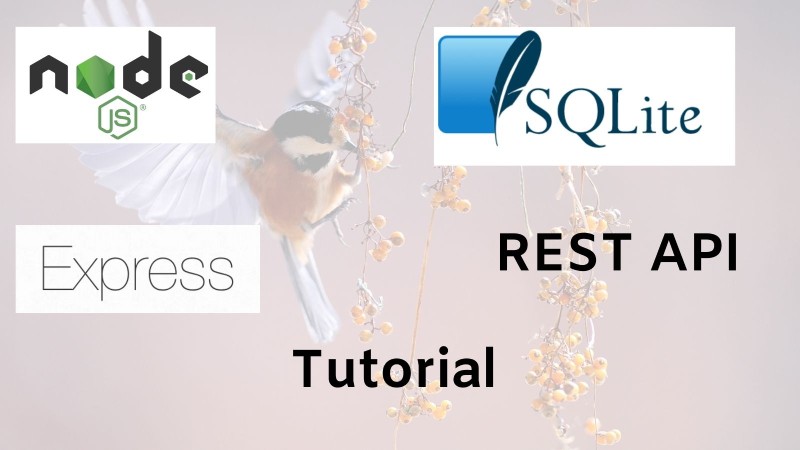 Before we dive into the code, below are some good to have prerequisites:

In the next stop of this Node.js SQLite tutorial, we will set up the database.

There is no doubt that SQLite is the most deployed and used database, every mobile phone has it, every Mac and windows 10 machine has in addition to countless millions of other applications. Unlike other relational databases that have a server where clients connect to like MySQL or PostgreSQL, SQLite is a self-contained database. It works as a stand-alone file but still packs the punch with a long list of features. SQLite is ultra-reliable and fast. It was developed to work offline in a battleship.

If SQLite is not really a client-server architecture relational database would there be any use-case for using Node.js with it? Yes, there are many, for instance, if we create an offline-first application that needs a relational database the only choice would be SQLite. Some people even run integration or end-to-end tests on SQLite where the main database of the application is a client server-based database. Usually, an object-relational mapper (ORM) is utilized to do this kind of seamless database swap. Another use-case can be if we are building an Electron app and need a database to support any actions offline. SQLite can even be leveraged as temporary storage to unblock the user to perform an action offline which can later be synced with another API/database when the device is back online. There can be many other usages for this demo we will build a simple Quotes API.

We will build a Quotes API with SQLite as our database of choice. For this, we will first create a SQLite database with:

First, we create a folder called nodejs-sqlite then went into it. After that, we created the database with the sqlite3 command. It will give us a SQLite prompt like the below:

We can create the “quotes” table with the following SQL:

After the quote table is created, we will insert some quotes for later testing by executing the SQL query as seen below:

After inserting the 17 rows, if we run `SELECT * FROM quote” we will see an output as follows:

Next up, we will set up Express.js to show the quotes pulled in from the database we just created.

There are multiple ways to set up Express js, we will use NPM to set up express. To setup express, we will run the following commands in the same directory that has the quotes.db file:

The first command will set up the npm project with the default setting. It will also create the package.json file. The second command will install “express” and “better-sqlite3” NPM packages that we need to create our Quotes API.

Get Quotes API with pagination #

To add the GET Quotes API, we will add an index.js file on the root of the project besides package.json that will have the following contents:

The above index.js will be our server with Express for this Node.js SQLite demo tutorial. In this file we require express and set it up with 2 routes, the root / just sends back an alive message. It acts more like a health check/ping to the application.

Consequently, we set up the /quotes route which is handled by the quotes router file defined in /routes/quotes explained next. After then we listen to the port and start the server.

Next, we will add a file routes/quotes.js as referenced on /index.js with the following contents:

In this /routes/quotes.js file we create a new express router and add a get / route which will listen to /quotes route. We do a try-catch and call the next middleware if there is an error.

It also requires the /services/quotes.js file from this file we call the getMultiple function to get multiple quotes passing the page from the query parameter which will be parsed as /quotes?page=1 from the query string.

Next up, we will create the quotes service at /services/quotes.js which will contain the following things:

In this file we require two other files, first one is /services/db.js which will be the entry point to the database that will run queries on the database. The next one is the /config.js that has configuration options like the number of rows we want to show per page put in as listPerPage.

This file has a getMultiple method that is used to query multiple quotes from the database. It uses an easy offset calculator based on the page number and list per page config. The offset is passed in the query to get multiple quotes. Limit and offset are used to enable easy pagination in the above code.

After that we will create the referenced /services/db.js with the following content:

This /services.db.js file is the only file that communicates with the SQLite database. It has the full path of the database file quotes.db and we also require and use the better-sqlite3 NPM package to run our SQL queries.

The quotes service also required the config.js file at the root of the project and it will have the following code:

The /config.js is like a helper file used to store any configuration or credentials. For this Node.js SQLite example, we only store the list per page config which is either taken from the environment variable or if that is not available it falls back to the value 10.

After adding all these files, if we run the server with node or nodemon command like:

We can see the following output on the browser when we hit http://localhost:3000 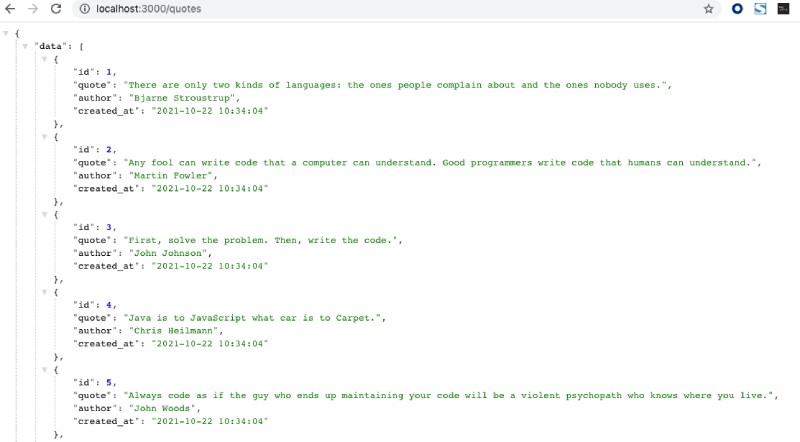 So, what happened here is the GET request to get multiple quotes traveled in the following way:

And it fetched the data from the quotes.db SQLite database and rendered it back to the browser. As the pagination is also set up we can try https://localhost:3000/quotes?page=2 which will give us 7 quotes from id 11 to 17, if we try page 3 it will return an empty data array as there are only 17 quotes in the SQLite database. All the code added for this step can be viewed as a pull request for your reference.

In the following section, we will add the POST Quote API which will enable us to create a new quote.

Post API to save a new quote with Node.js SQLite #

To add a new Quote we will crate a POST quote API for this Node.js SQLite tutorial. Before that, we need to make sure that Express can accept JSON in the body. To enable Express js accepting JSON in the request body we will need to add the following line after the Express app has been initialized in the /index.js file.

Below this line our routes will be placed. Consequently we will add the POST quote route in the /routes/quotes.js file as follows:

Here we added a new route to POST quotes. It calls the create method in the quotes service and sends the response back as JSON. If there is any error while creating the new quote on SQLite with Nodejs it will log the error and call the next middleware.

Subsequently, we will add the create function in the /services/quotes.js as below:

In the above code snippet, we have added the 2 methods validateCreate and create in the quotes service. This create method runs the insert query to add a new quote to the database after the validation has passed. In the validating method, we check if the quote and author exist, if any of the two is missing an error with HTTP status code 400 is sent back. In a more real-world application, the Joi NPM package can be used for better validation.

Notice, what we have called the db.run function not db.query as in the get quotes call. We will add this run function in the /services/db.js file as seen below:

Both the run function in /sevices/db.js and the create function in /services/quotes.js will need to be exposed out being included in the module.exports definition.

After that given our server is running, we can run the following cURL command to insert a new code:

It will result in the following output:

Hurray! Our add quotes API is also working too. All the code to introduce the POST API to add a new quote can be seen in this pull request.

For your own practice, you can add the update (PUT) and delete endpoints to get a better hold of how to do a full-on CRUD API.

All the code for this tutorial is available in a public GitHub repository for your reference. To get started quickly for the thing that has been built please follow the steps below:

In this tutorial about Node.js and SQLite, we have learned how to create a minimal REST API for Quotes. This is more like a starting point to build bigger things.

You can use the open-source Github repository to use this example as a base to build your own API with Node.js and SQLite using the Express.js framework. Best of luck!