Both Docker and Node.js have risen in popularity in the past 5 years. Running Node.js on docker containers with docker-compose for local development is a great experience. In this step-by-step tutorial, we will look at how Node.js docker and docker-compose with multi-stage docker build work in sync. Time to get cracking!

Docker has changed the way we software engineers work in the past 5-7 years.

Containers have made it easier to ship the whole stack including the OS, not just the code.

There is more than one reason to use docker everywhere, especially in the development environment. Docker was the second most loved platform in the Stack Overflow Survey 2020 same as 2019. The same survey 2020 edition also quotes

“We also see some year over year growth in the popularity of container technologies such as Docker and Kubernetes.”

Docker is used by 35% of all respondents and 39.2% of professional developers. It is safe to say 1/3rd or more software engineers are using docker. In 2020 and beyond, if you are not using docker as a developer you are missing out for sure.

Node.js on Docker with high scalability #

Node.js was initially released in 2009. It has been used for high traffic web applications by big companies like Paypal, Netflix, Ebay, and LinkedIn to name a few. It has surely been battle-tested in the past 10 years and has proven its mettle.
It also works well with a big team where Spotify is an example. It was used by 90 teams and 600 developers at Spotify. As per W3tech, 1% of websites use Node.js.

1% of the websites tracked by W3tech might seem a small number, but Node.js is popular in websites with high traffic as mentioned above.

With high software scalability in the picture, it becomes a lot easier to scale the application horizontally with Docker and Kubernetes. We can say thet, using Docker with Node.js enables high scalability.

Assumptions for Docker with Node.js #

Let’s dive deeper into step-by-step details of this tutorial on how to run a Node.js express demo application on docker with docker-compose.

1.1 Use express-generator to scaffold the app #

To generate your demo Node.js express application for docker with Node.js, execute the following commands:

Notice that we are generating a web app not an API and using pug as the templating engine for the views. It should give you an output like below: 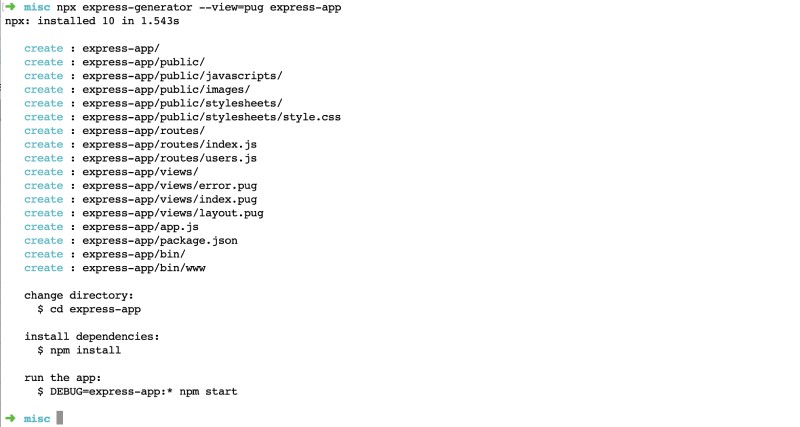 Now, let’s run the app to see how it looks on the browser, no Node.js on docker yet. To start the Node.js express application, please run the following commands: 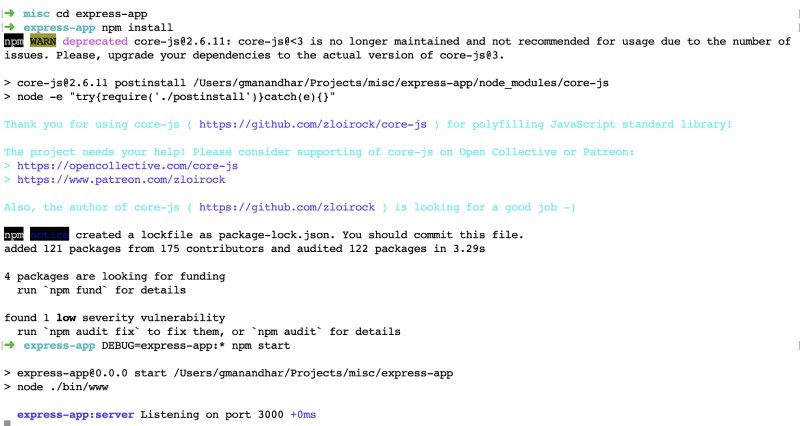 Hit http://localhost:3000 on a browser like Chrome to check if the app is running correctly. You should see something similar to this:

When you hit the homepage on the browser, you will also see some logs on how long the request took to respond on the command line.

At this point, I have added it to git, if you want to view the code it is in this pull request.

You can edit the page to say something different like Express on Docker and Let’s get started or something of that sort. To do this we will need to edit 2 files, /routes/index.js and views/index.pug, like below. You can get the file changes in this pull request:

For a better developer experience, it is best to reload the server when a file changes. To achieve this we use nodemon. There are 2 ways to use Nodemon. The first way is to install it as a global node module resulting in a global nodemon command. The second one is to have it as a dev dependency local to the project. We will be using the first way with the following command:

After you run your application index (bin/www in this case) with nodemon it will restart the server on each file save. Below is an example of how it looks on server restarts on code change:

At this stage, you have the generated Node.js express app running. It can also be run with nodemon to restart the Node.js server on every file save. Next stage is to use Node.js on docker.

To use Node.js on Docker, we will start with a Dockerfile. As per the Docker’s official website:

A Dockerfile is a text document that contains all the commands a user could call on the command line to assemble an image. Using docker build users can create an automated build that executes several command-line instructions in succession.

We will start with a simple dockerfile and move on to a multi-stage one. We will use a multi-stage build dockerfile so that we have one stage for development and another one for production. In the development stage we will have Nodemon. There will be some optimization for the production docker container, one of them being the absence of not needed Nodemon.

Below is the simple Node Dockerfile for the express application:

The dockerfile is simple. It is:

With good use of Docker caching and BUILDKIT you can get faster docker builds. To build the above dockerfile to a Node.js docker image execute the following:

It will take some time. After it is done you should see an output like below:

Time to run the docker image and see the output for Node.js with Docker on the browser. To do this run the following command:

In the above command:

Now to know the container is running, run the following command:

You can view the logs from the container with the following command:

This will attach the command line (bash) to the container logs. Then hit the url http://localhost:3000 on a browser. You will see some logs. Hit Ctrl+C to stop viewing logs. Now you can stop the container with the following command:

Below is a recap of running the docker container, viewing logs and stopping it:

This above simple dockerfile is also available as a pull request for your convenience. At this juncture, we can proceed to make the Node.js dockerfile even better with multi-stage docker build.

We will create 3 stages from the above simple dockerfile. The stages will be as follows:

Below is the modified dockerfile:

You can build the above Node.js dockerfile to run Node.js on docker with the following command:

The addition here in this docker build command compared to the above one is the inclusion of --target=dev. It tells docker to build the dev stage not production. If you want to build this multi-stage docker file for Node.js on docker use --target=production and it will create a docker image optimized for production.

To run the Node.js docker image and attach to its logs, you can run the following comamnd:

The main difference here from the above docker run command for Node.js with Docker is -v "$(pwd)":/src. As we want the server to restart on every file change the current directory is mounted on the docker container’s work dir. With this on each change the sever will restart for Node.js on docker.

The mulit-stage dockerfile for docker with Node.js can be found in this pull request. Below is a quick recap of the commands for Node.js docker multi-stage build: 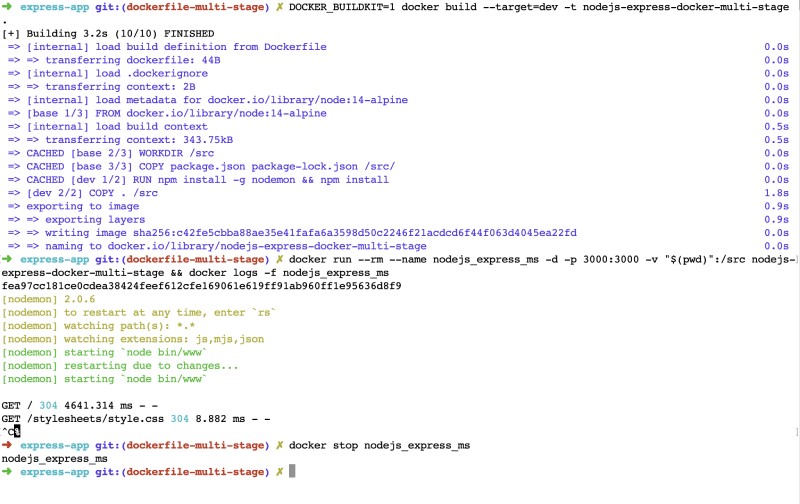 3. Node.js Docker made better with docker-compose #

As seen, we had to run long commands like below:

It was not easy, to say the least. Stopping the running contianer also needed another docker stop command. The solution to these issue is using docker-compose with Node.js on docker. Docker compose can be used effectively to sew up multiple services like a database with the applicaiton Node.js docker container.

With docker-compose you can get the application running with just as single commands, docker compose up. It will build the containers if they are not built and run them for you. Next, we will see how to do it.

The docker compose file has some parts to understand:

Here you see the output of the docker-compose build for docker with Node.js with BUILKIT in action:

3.2 Run the Docker with Node.js using docker compose up #

The changes for docker-compose addition is in this pull request. This is how you can run Node.js on Docker which works very well for Developing as well as putting the containers in production environment.

TLDR; Give me a quick run down #

All the code is in a public github repository. You can run the following commands to get started quickly:

Enjoy! Now you can reverse engineer the Dockerfile and docker-compose.yml file. If you have any questions, search for specific thing like say target in this post.

There are some considerations you should be aware of:

Using Node.js on Docker is a rewarding experience. If you want to upgrade Node.js, it is as simple as changing the version on the Docker file, rebuilding it and using it. Node.js is also great for microservices.

If you want better developer experience and amazing scalability on production with ease, start using Node.js on docker today.