Redis is an open-source in-memory datastore used as a database, cache, and even a message broker. Redis can be used easily with docker and docker-compose for local development as a cache to a web application. In this post, we will set up Redis with docker and docker-compose, where Redis will be used as a cache for a Node.js/Express.js REST API with PostgreSQL as the main database, let’s get started!

Before we start looking at the code, below are some good to have preconditions:

Given that is mentioned, now we can proceed to run Redis with just Docker first.

Redis, as mentioned, can be used as a cache too. For this post, we will use Redis as an in-memory cache in place of getting the data from a Postgres database. To do this, we will use the official Redis docker image from Dockerhub. To run the Redis 6.2 version on an Alpine container we will run the following command:

The above command will start a container named test-redis for the given image version of 6.2-alpine` with the loglevel of warning. It will give the following output:

To run some Redis commands inside the container, we can run docker exec -it test-redis redis-cli which will run the redis-cli in the running container. We can try out some redis commands like below to see things are working:

As seen above we could set some value with the key test and get it back. As there are no volumes set or any commands given to persist the keys and values will be lost when the container stops. Next up we will look into running the same version of Redis with docker-compose.

Here in the above docker-compose file, we have defined a service called cache. The cache service will pull the redis:6.2.alpine image from Dockerhub. It is set to restart always, if the docker container fails for some reason it will restart. Then, we map the container port 6379 to the local port 6379. If we aim to run multiple verisons of Redis, we can choose a random port.

Consequently, we use a custom redis-server command with --save 20 1 which instructs the server to save 1 or more writes every 20 seconds to disk in case the server restarts. We are using the --requirepass parameter to add authentication with the password to read/write data on the Redis server. As we know if this was a production-grade application the password won’t be exposed out. This is being done here because it is only intended for development purposes.

Subsequently, we use a volume for the /data where any writes will be persisted. It is mapped to a volume called cache. This volume is managed as a local driver, you can read more about Docker volume driver if you want.

This container is running similarly to the above one. The two main differences here are the volume is being mounted to persist the saved data over restarts of the container and the password is supplied for authentication. In the following section, we will add Redis to an existing application that has a PostgreSQL database and a Node.js API using that database.

As an example for this guide we are using the Quotes API application built with Node.js and Postgres. We will introduce the Redis service in the existing docker-compose file as follows:

This file is similar to the above docker-compose file. The main changes here are the api service now also depends on the cache service which is our Redis server. In addition to that, in the API service, we are passing the Redis related credentials as extra environment variables like REDIS_HOST, REDIS_PORT, and REDIS_PASSWORD. These parts have been highlighted in the above file. 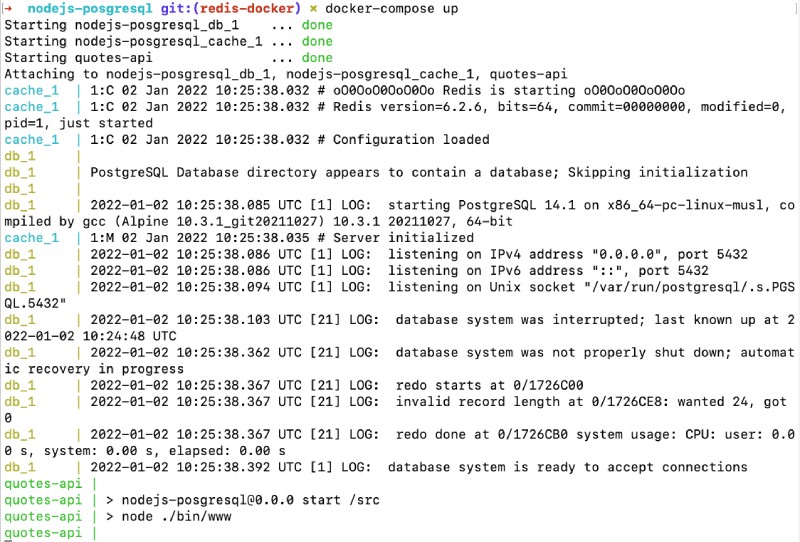 Depending on if the Postgres container has data it will behave a bit differently. Now if we hit http://localhost:3000/quotes/author/chris it will show the following output:

Refresh this page 2-3 times and go back to the docker-compose console tab, we should see something similar to the below: 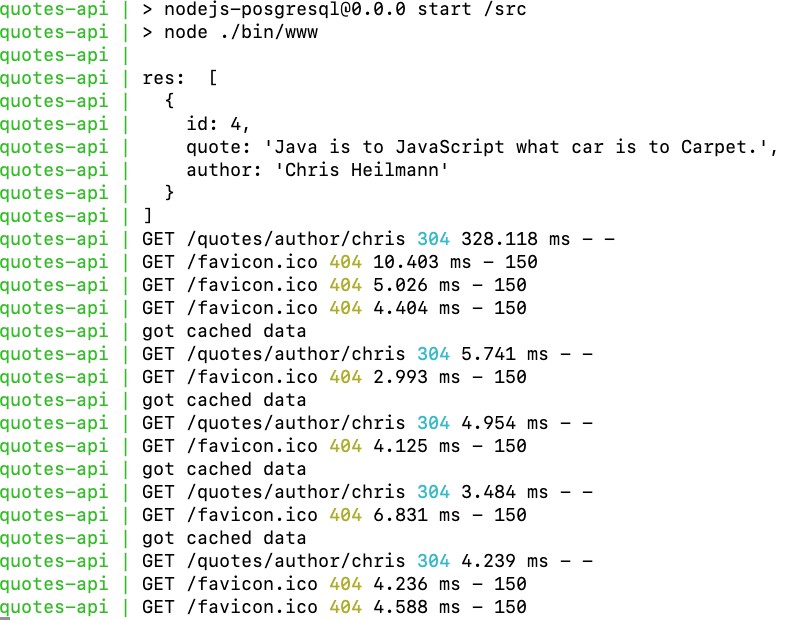 As we can see above the first hit went to the database and it took 328.118 ms to get the quotes for the author Chris. All subsequent requests got the request from the Redis cache and it was super fast, responding between 5.7 to 3.48 ms. As the cached content is there for 10 minutes, if we run the redis-cli inside the container with the following command:

Then we can see the content of the cached key and its value with: KEYS * to list all keys. To list the value of the found key we can use MGET quotes_author_chris_1 it will show us the contents of that particular key as seen below:

The PostgreSQL query cache will make things faster for consequent calls but if there are lots (thousands or millions) of rows on the database then the query cache won’t work that great. That is where a key-value cache stored on memory like Redis would be a great performance boost as you can see above. The change done for this tutorial is available as a pull request for your reference.

We saw how to use Redis with docker and the with docker-compose. We also added Redis as a cache to an existing Node.js API and witnessed the performance benefits.

I hope this helps you understand how to use Redis in any application with docker and docker-compose without any hassle.