Most often than not, the success of any project (or start-up) is measured in terms of current and potential profits. We often overlook human growth which is even more fulfilling. In this post, I am going to discuss how a side project/mini startup -- AU Tech Jobs helped at least 6 people, all immigrants, land full-time tech jobs from casual non-tech roles and how it has changed their lives in more positive ways during this looming pandemic. 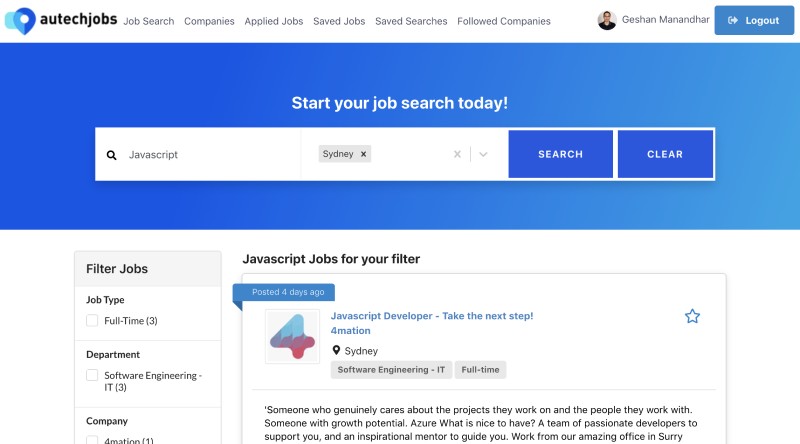 Towards the end of 2019, I become a Google Developer Expert (GDE) for Google Cloud Platform (GCP) which landed me $500 credit for GCP. I had a side project running since 2019 and a fraction of the credit was used for that side project. I had this idea to make a job aggregator, with a simple problem to solve.

The job searcher doesn’t need to go to 50+ websites to look for jobs of their interest, it is aggregated at one place.

The person looking for a job could follow companies, keep a track of jobs applied and do similar tasks. Along the same lines, I had also built a list of companies that provide work visa sponsorship in Australia. 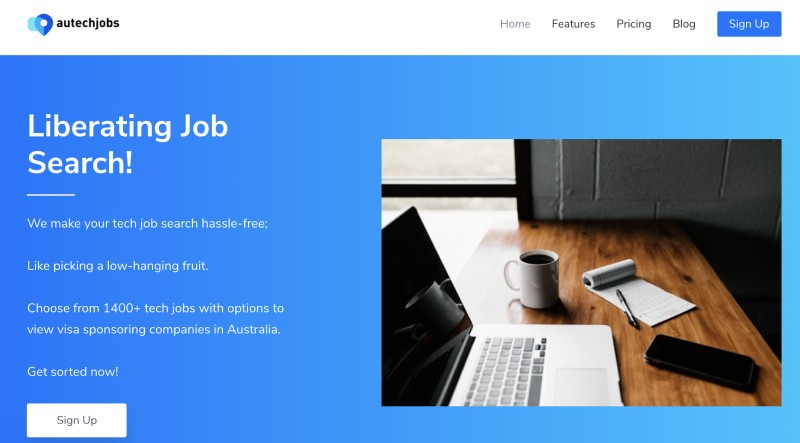 I had jotted down a gist on 2-Jan-2020 with a basic outline of how I wanted to get this Job aggregator to life from an idea in my head. After a couple of months and after tackling some of my own issues, I came back to the project. By then it was the end of April 2020 and the COVID-19 pandemic situation had gradually begun to settle in Sydney.

I wanted to do some microservices and I had a bunch of scrapers running in my head already.

Getting more hands in the game #

Sooner than later, I realized that building this by myself wasn’t going to be enough. If I wanted to help job seekers, I would need more support. As a result, my search for contributors began. But I thought to myself, What was the point? Why would anyone contribute/write code for free to support an idea some random guy has? This helped me materialize the value this project would bring to the team that contributed to it. So I reached out to freelancers/ job seekers from my network.

The value proposition was an opportunity to be a part of a tech startup, learn from one another and pave their way to a more lucrative full-time tech job. Another advantage was the network of people working on AU Tech Jobs.

In a matter of months, I had gathered 8-10 amazing people (some I had known previously) who were pumping code to the idea. It had already taken some shape and at this point, there were already 2-3 Node.js microservices on Google Cloud Run. I was architecting the solution in the little time I could give to the project and this amazing bunch of people was moving the idea forward.

On 3-Aug-2020 we did a soft launch and publicized AU Tech Jobs in some of the social media channels.

The response was lukewarm but we were not after the numbers, we were after up-skilling ourselves.

This project fulfilled many purposes at once. For job seekers, it acted as an opportunity to gain real-time work experience through a project. For others, this meant many things; a means to give back to the tech community, a means to build up new skills or a means to explore new tech opportunities. People who didn’t have full-time tech jobs were after that prized possession and those who had one (not me) were after the next better role they could get using AU Tech Jobs as a bridge.

Like any other idea, start-up, or side project, We also had some joiners and leavers. The leavers were the ones who would bag a full-time tech job during the pandemic. On top of it, they were already battling a visa situation, which made this success even more worthwhile.

As it is pretty clear, here in Australia if you don’t have a permanent residency (PR) or Australian citizenship your chance of landing a job is automatically at least halved.

And then without money to make ends meet, the motivation to contribute to a project could also dwindle with time.

Getting a full-time job is an entirely different ball game when you are an immigrant. You land in a new country and city. The culture is very different than what you were used to most of your life. Even your mother tongue is not English. This is why 6+ people getting full-time jobs through AU Tech Jobs in itself is not a small thing.

Our beloved, SB, who had contributed really well to AU Tech Jobs, was the first person to join the team and was living here in Australia. At that time, he was employed with an Aged Care center. He was sharpening his programming and frontend software engineering skills with React like a lion devouring his kill.

Against all odds of visa, not having worked in tech before he bagged a full-time coding job in Brisbane.

In just 3-4 months he really stood out and gave his level best to not only get the tasks for AU Tech Jobs frontend done but also lead the team in his own right.

It was a happy and sad moment for the team when he moved on. Happy because this was a life-changing moment for him where he said goodbye to odd hours at his old job, needing to be onsite during a pandemic.

We were sad because his new full-time job meant that he would have to leave our project too. Plus, h and BA were the dynamic duos taking the front end of AU Tech Jobs forward. Looking back I think we were happier than sad :).

The goal for AU Tech Jobs was always clear, we were not sure if we could monetize it. However, we knew it was a valued learning opportunity. . One that the team members could use as a springboard to get that prized full-time tech job.

That is what AK did and he did it pretty damn well. He had recently finished his bachelor’s here in Sydney and was working as casual staff at woolies. He is a full-stack workhorse, take my word for that. I see my younger self in him. He is skilled, talented, and driven.

Had AU Tech Jobs been well funded, he would be one of the first people we would hire full time.

He sharpened up his CV and got an offer for a junior software engineer in December.e started working from mid-Jan this year.

Another one is RG, he had been struggling to crack that coveted full-time tech job for a while. Working at a supermarket then and doing odd hours like 6 AM to 3 PM he really wanted to bring flexibility in his work hours.

With more than half a dozen job interviews under his belt and lots of meaningful contributions to AU Tech Job’s backend and frontend, I knew it was just a matter of time for him to break that glass ceiling.

Not to my surprise, he got an offer in Jan-2021 and started working as a Jr. Frontend Software Engineer from mid-Feb this year.

Then we have AM, she re-found her love of writing with AU Tech Jobs in Sep-2020. Now she is freelancing as a writer and social media person.

You can read some success stories on this blog post at AU Tech Jobs’ blog too. I can go on and on with the other 3-5 people who cracked the prized full-time tech job.

Not only did they increase their income by 1.5x to 2x but also earned the flexibility to work from home during such a harsh pandemic time.

Not all rosy stories #

Of course, not all people who contribute to AU Tech Jobs landed better full-time tech jobs. A couple of them did land 3-4 interviews but it did not convert to a job offer. However, each journey is individual and depends on individual capacity to learn and grow. Some of them did not pay much heed to the suggestions provided :). Still, I wish success and good luck to all of them.

The project has surely slowed down in the past months as most contributors have full-time tech jobs now. We have burnt some money at ~$1 a day, thanks to Google Cloud Platform's clear pricing and that money has also come from my Google Developer Expert credit. We have gained around a user a day for the past 340 ish days, not a great number but relatively good for the 0 marketing dollars spent.

Below is a quick timeline of the people I have mentored to land full-time tech jobs in the past 3 years. These are mostly Nepalese tech students who pursued their bachelor’s or master's degree here in Australia. So as an estimate, they have spent around25% (6 out of 24 years) of their life in computer-related studies. They have the skills to get lucrative tech jobs but just needed an extra push adjusting to a new tech community. Some of them also had some years of full-time work experience back in Nepal, which would make them an asset for any tech company.

I am looking forward to contributing through mentorships or tech job searches to whoever may need it. You can get in touch with me via email, find it in this blog somewhere :).

You can view the interactive timeline too.

If software engineers like us do this small step of helping someone junior with CV help, referral, being a reference, or mentoring a person to find a job it translates to a life-changing experience for them.

If you can please do it.

I have worked as a software engineer for the past 15 years in 4 countries across 3 continents. I think I know some things about how to architect and build scalable and resilient software.

If I can teach the software engineering best practices and trends to these young people and help them land a full-time tech job probably that is one of the best forms of giving back to the community.

It is surely life-changing for them and it could even possibly be better than contributing in other ways like code or content. Thanks for reading!