PostgreSQL is one of the most popular relational databases. It is an open-source RDBMS having 35 years of active development behind it. In this tutorial, you will learn how to use the LIKE expression in a WHERE statement to get rows that match or do not match a given pattern. Let’s get going! 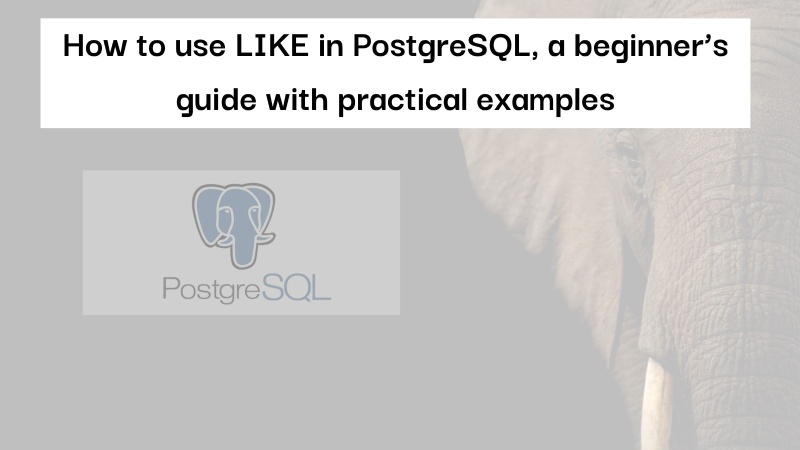 The WHERE expression in relational databases including PostgreSQL is used to filter out rows while doing a select, update or delete operation. For instance, if you want to select all the rows in a table of customers with the first name John, it can be written as:

If the table had 100K rows and 5 of the customers had their first name exactly as John those 5 rows would be selected. You can also use WHERE in the update and delete operation, as mentioned.

In case you want to filter out rows with a WHERE expression but based on some pattern in the string then you will use the LIKE expression. In the above example, if you wanted to list all customers whose first name starts with a J then you can write it as:

Now the above SELECT where will list out all the customers whose name starts with a J. You can also do something similar with a Regex like /J.*/gm as seen in this Regex 101 example.

In the next section, you will learn about the Quotes example used in the Node.js PostgreSQL tutorial.

For this guide on Postgres LIKE, you will use the example of Quotes from the Node.js PostgreSQL post. It is expected that you know about relational databases and PostgreSQL. You should also know about running the database server and running queries on that server.

Below is the SQL to create the schema and insert 17 quotes:

The schema is simple with one table called quote. It has 5 columns in total, first one is the ID which is a serial number and the primary key of the table. Then you have the quote and author columns, both are VARCHAR of length 255 characters. The quote column is unique, meaning there can be only one unique quote on the table and the database engine will not allow the exact same quote to be saved more than once. Then you have created two helper columns to know when the quote was created and last updated.

To test things out you can either run PostgreSQL locally or run PostgreSQL with Docker and Docker compose. Another way to run this example without installing anything is, by trying out a working PostgreSQL server with the prebuilt example on SQLFiddle.

It is advisable to get started with the SQLFiddle link as it requires no installation or any other process, just click the link and start modifying your query to see output on the fly. You can highlight a single query on SQLFiddle and execute only that one. In the next section, you will learn how to use LIKE to match any number of characters in the column values.

Match any number of characters #

From the above quotes table with 17 quotes, the first task for you is to find the quotes that begin with a There. It can be done by using the following SQL select query:

It will give you 3 quotes as follows:

As you can see, with the % with the LIKE expression it does not matter how many characters are after the pattern. In the above case, the pattern, therefore, became starts with There, and then it can have any number of characters. Similarly, you can use it to find quotes that end with a given pattern too.

Another example to test matching any number of characters can be to list out quotes that have the word only in them. It can be done by running the following SQL query:

Even here the number of characters before and after the pattern used in the like expression did not matter. As long as the quote had the word only it was returned. You can also use th NOT keyword with like to inverse the condition, for example NOT LIKE ‘%only%’ will give all the quotes that don’t have the wordonly`. Next, you will find out how to construct a pattern with the exact number of characters.

Match the exact number of characters #

Let’s suppose you know that there is a quote that has a word that 4-letter word and starts with go and you want to search for that quote. You can do it by running:

This will render only one quote with the word that matches the pattern good as follows:

If you look closely there is another quote by Martin Fowler, who states:

The above query comes back with 2 quotes as expected given that it does a case-insensitive pattern matching.

There you have it, some practical and useful examples of both LIKE and ILIKE within a hands-on context. The code example is on SQLFiddle for your reference.

You can also use ILIKE with the above example with % for any number of chacters and a combination of NOT and other variations. Similary, you can use both LIKE and ILIKE with more complex select statement having joins, update, and delete statements too.

A word of caution #

Even though LIKE and ILIKE are very useful, be very careful when you run them in a database with a lot of records.

If there are proper indexes on the searched fields it might work Ok but if the database is under-indexed these queries can take a long time.

They take a long time because it matches the pattern in text fields which is a resource-heavy operation compared to say matching integers.

You are aware of a tool but be careful when and how to use it. It might be ok to use in a reporting scenario. On the other hand, using it to perform searches for the user might not yield the best results depending on the scale.

I hope you have learned about how to use the LIKE expression in your Postgres where clauses. The same implementation for LIKE can be applied to other databases like MySQL too. Keep learning!