Kubernetes is super effective on running cron jobs as well as other web application workloads. Kubernetes cron job is a special kind of Kubernetes job that runs on a time-based schedule. In this post, we will focus on how to run optimally configured cron jobs on Kubernetes. 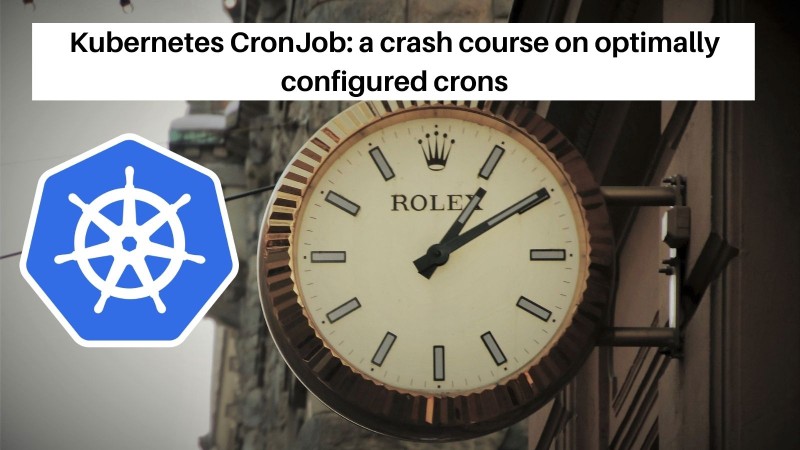 Kubernetes has multiple definitions, we will first look at a couple of them and then try to simplify them. To start with, the official “what is Kubernetes” page on Kubernetes.io says:

Kubernetes is a portable, extensible, open-source platform for managing containerized workloads and services, that facilitates both declarative configuration and automation.

It further adds: “The name Kubernetes originates from Greek, meaning helmsman or pilot. Google open-sourced the Kubernetes project in 2014.” There is also a mention of the over 15 years of Google’s experience running production workload at scale.

It adds: It was originally designed by Google and is now maintained by the Cloud Native Computing Foundation. It aims to provide a "platform for automating deployment, scaling, and operations of application containers across clusters of hosts".

What does Kubernetes do? #

Ok, now let's simplify stuff. If I say this is the container era for deploying workloads like web applications, cron jobs, and anything in between I won’t be wrong. In container land, Docker has won the race and it is the defacto container tool.

The answer to all of the above Hows is a “container orchestrator”. Around 2015 there was a slight competition between Kubernetes, Docker Swarm, and Apache Mesos. By mid-2017, Kubernetes comfortably won the race to become the wildly popular de facto container orchestrator as per Google Trends that we can see below: 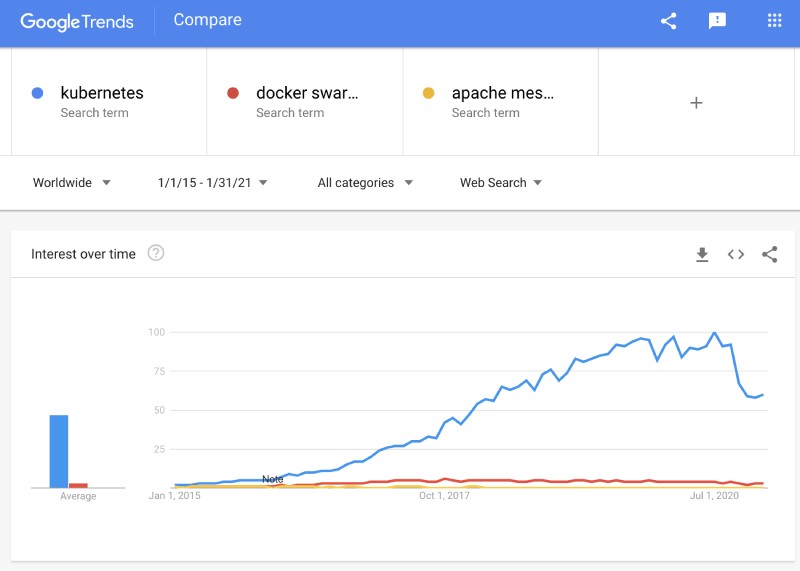 Even though Kubernetes is flexible, powerful, and ultra-popular. There are some things Kubernetes is not, it is better to know about them too. In today’s time, Kubernetes has become a well-established platform with a thriving ecosystem around it.

If we look at a bit of Kubernetes history, Kubernetes Cron Job was called ScheduledJob. In version 1.5 it was renamed to be called Cron Job. In Kubernetes, Cron Job is a special kind of a Job that runs on a repeating schedule. The frequency of the Kubernetes Cron Job is written in the familiar Cron format. For example 0 4 * * * in the cron format means at 4:00 AM every morning. You can read more about the cron schedule syntax if you want.

How would you know if a cron job missed one or more of its schedule? It is better to know more about effective cron job monitoring before it slips unnoticed.

Next, we will look into a simple Kubernetes cron job example.

Let’s analyze this simple, not so well configure Cronjob.yaml file in detail:

Now, we will schedule this cron job on a local kind Kubernetes cluster to try it out. The kind version I am using at the time of writing this blog post is 0.9.0 which has installed Kubernetes version 1.19.1.

If we save the above file as cronjob.yaml we can add it to Kubernetes with the following command:

After the command runs successfully we will see something like:

To check if the cron job is created successfully we can execute the following:

If all is good, it will print out something as follows:

After around 5 minutes if we try kubectl get po | grep print-date we should see that the cron has run once, like below:

Let’s recap the commands below:

In the next part, we will look at configuring the Kubernetes Cron Job optimally.

In the above simple example, let’s scrutinize some things:

The answers to above questions and more lies in the cron job configuration below:

Let’s analyze some of the new configurations we have added and what do they do:

Below is a screenshot of reapplying the new definition and checking logs from a run from the new configs we added: 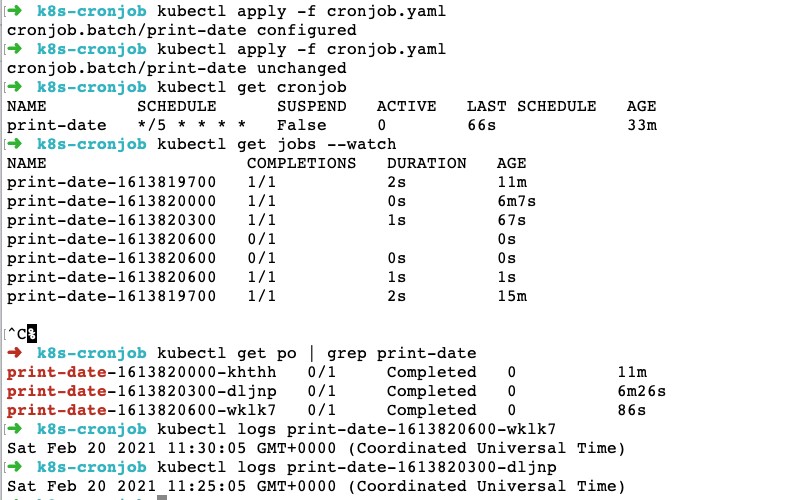 A new command in the above image is:

It gets jobs and watches it for any changes. As you can see in the screenshot it detected the change when running job print-date-1613820600 every second for 2-3 seconds.

Protip: You can force run a Kubernetes Cron Job (outside of the schedule) with a command like below:

It is ultra convinient for testing cron jobs as we don't need to wait for the scheduled run.

We can see an example of the above command as follows: 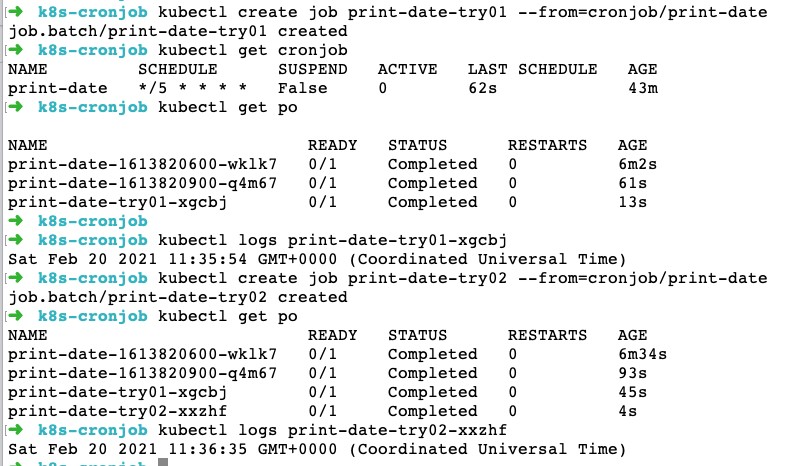 As seen above the cron job even though scheduled for every 5th minute ran at 11:35:54 and 11:36:35 which is outside of its regular schedule. It was possible because we force ran the cron job on a need basis than waiting for the schedule. This command is very handy when testing Kubernetes cron jobs that are scheduled to run say every hour or every day.

Kubernetes cron jobs are very useful as we have seen. In addition to being great at handling long-running workloads, Kubernetes also does an amazing job of executing jobs and cron jobs alike.

Even modern applications have tasks that need to be done with Cron jobs and Kubernetes cron jobs can be exploited for such tasks.